You are here: Home / Featured / Train for Heroes: A salute to servicemen

Terry Hobbs’ eyes mist over. For a second he pauses, takes a deep breath, and says simply, “We are so grateful to have him back.”

Hobbs, his wife Jenny, and 22-year-old son Aaron are in Vancouver from Britain at the invitation of Rocky Mountaineer. Together with four other Middle East veterans – two Canadian, an American and an Australian – they are guests of honour onboard the first inaugural Life Changing Train for Heroes from Vancouver to Lake Louise.

Aaron, a Queen’s Royal Lancers gunner, was in a vehicle destroyed by an IED in Afghanistan. His two young fellow servicemen were killed.

Aaron sustained a fracture spine and pelvis, a dislocated hip and assorted lacerations. His lengthy road to recovery is still not over, but his dad credits Help for Heroes, a UK military charity, with providing critical support to Aaron and the family. 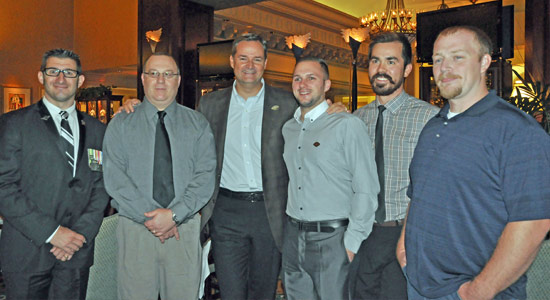 In appreciation of that support, and to help other servicemen, the family has raised over  £10,000 for the organization.

“They’ve been there for Aaron since day one,” Terry says.”We just wanted to give something back.”

Shere Lowe’s son, John, grew up in Cloverdale, BC. He joined the Canadian forces in 2007. In 2009 he arrived in Kandahar for a six-month tour of cut in the Sperwan Ghar region of Afghanistan

“Seeing ‘Canadian Forces’ show up on the call display at home was one of my worst fears,” recalls his mom.

For John, the horror of talking to fellow soldiers one minute, and hearing they’d been killed an hour later caused a different kind of injury. Depression and anxiety, known as Post Traumatic Stress Disorder, gripped his life. It was three years before he sought help, and then it was Wounded Warriors Canada that came to the rescue. Shere Lowe is full of praise for the organization, and the courage of her  27-year-old son.

I ask her about help from the Canadian government. Clearly she is disgusted. “They did nothing ,” she says simply.

John, who’s grandmother, Doris Fraser, was also a guest on the Train For Heroes, later said, “The ride for me was a reminder of how good life can be. It was just a moment of happiness.”

This month, as you pin on a poppy, take time to reflect on today’s young service men and women. Their injuries aren’t always visible, and they are – as troops always were – too young for what they have witnessed.